People who have never taught don’t quite understand just how stressful it can be. Teacher stress is much worse than the stress you encounter in many other careers. Not only are teachers “on” all day, but they often work extra hours outside of contract work and act as mentors, caregivers, peacemakers, social workers, and more to a variety of students with a multitude of needs.

I worked at a crisis center where people in crisis would call or come by. They were often suicidal. It was very difficult, but I guarantee teacher stress was worse! At least at the crisis center, I was only handling one person at a time. And we were supported emotionally as well.

As a teacher, I take care of 150+ students a day, and many are in crisis. There is no support for my own emotional health. 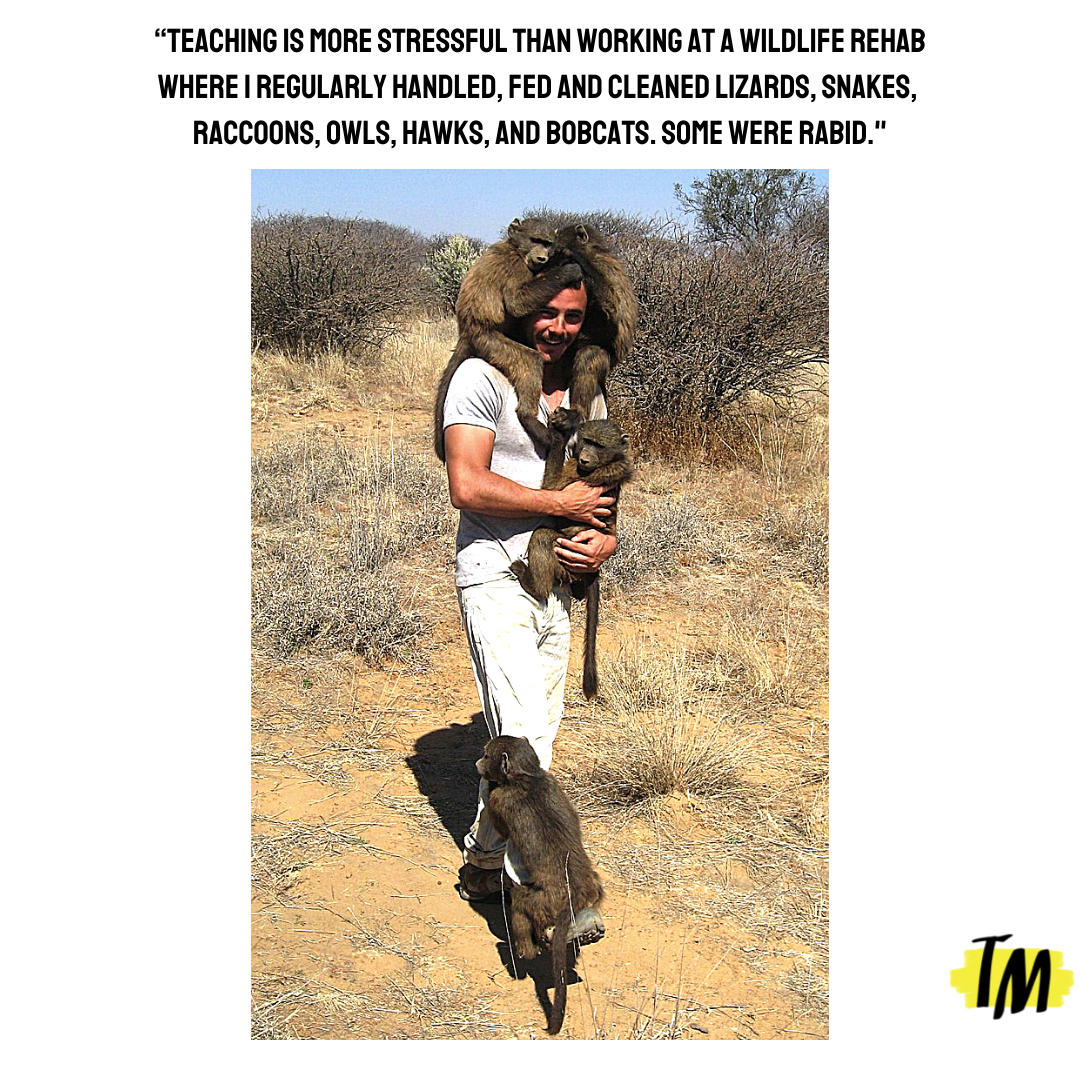 I asked my social media followers to describe other stressful jobs and situations they have had that still don’t compare to the stress of teaching. Respondents cited the following jobs they had worked as less stressful than teaching:

Some teachers used to have very physically demanding jobs that still didn’t compare to the stress of teaching.

One person said, “I used to clean up a construction site for 13 hours a day, 6 days a week. I was physically exhausted, but not mentally and emotionally. Plus, I didn’t think about work when I went home. Teaching is much harder.”

Another person said, “Teaching is more stressful than carrying troughs of brick mortar in the hot sun for 8 hours a day. I was so tired when I got home that I had to nap, so I had the energy just to shower! However, I didn’t have to worry about those bricks once I left work.” Another teacher said their job is much harder than when they did cleanup after Hurricane Katrina.

Others talked about fearing for their lives at other jobs, but that still didn’t compare to the stress of teaching.

One person said, “Teaching is more stressful than working at a wildlife rehab where I regularly handled, fed and cleaned lizards, snakes, raccoons, owls, hawks, and bobcats. Some were rabid.”

A teacher said that he used to be a park ranger at a national park where he was “bluff charged by a bear” and it was still not as stressful as teaching.

Another person said that “Teaching is more stressful than undergoing spinal surgery that could have paralyzed me.” 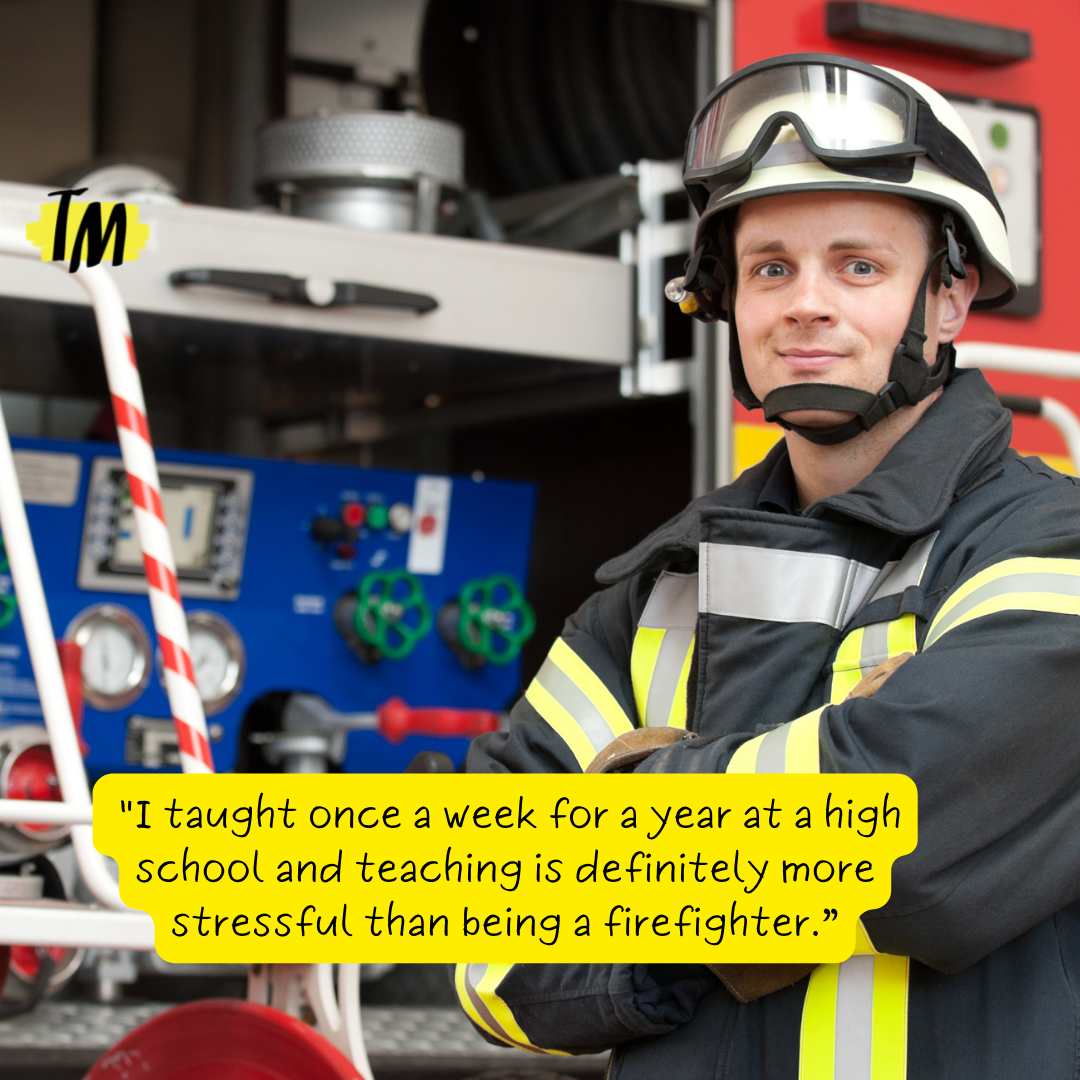 Other dangerous scenarios that were cited as being less stressful than being a teacher included:

Some other extremely difficult situations that were given as less challenging than being a teacher include: 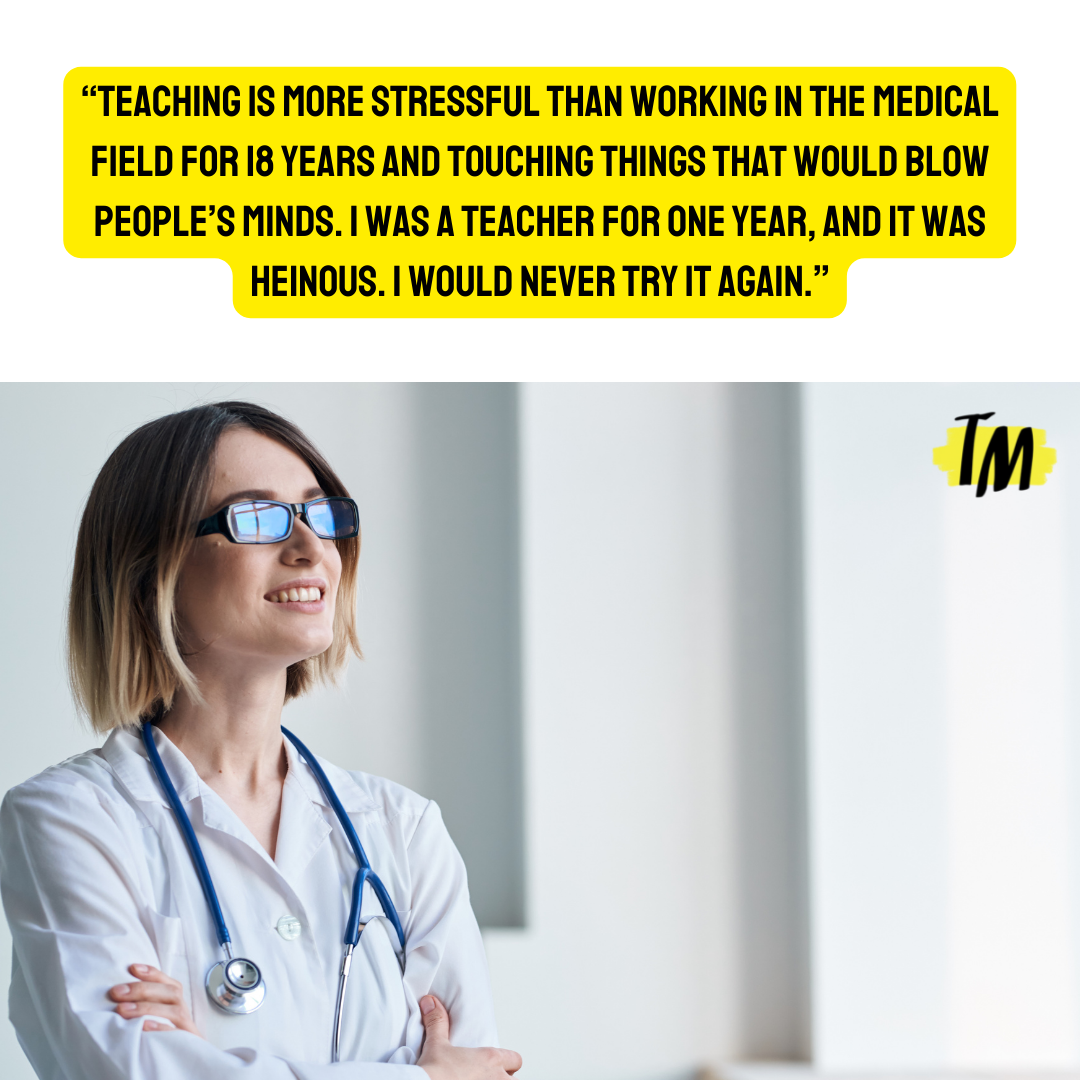 Some teachers talked about very stressful former careers that involved protecting the lives of others, and they still didn’t compare to teacher stress. One commented, “Teaching is more stressful than working in the medical field for 18 years and touching things that would blow people’s minds. I was a teacher for one year, and it was heinous. It was too stressful to relay information and keep people engaged. I would never try it again.”

A former social worker said, “Teaching is more stressful than working for Child Protective Services. At least they provided whatever supplies I needed.” An ER nurse said, “I bow humbly before every teacher!”

One current teacher said that “teaching is more stressful than flying a low-level helicopter route through mountains with the newest kid in the squadron and making sure we don’t die.”

A firefighter said, “I taught once a week for a year at a high school and teaching is definitely more stressful than being a firefighter.”

And a former teacher said, “I left teaching to become a doctor, and I can honestly tell you that teaching is harder than med school.”

Don’t Mess with Me. I’m a Stressed Teacher!

So the next time a non-teacher complains that teachers have it easy, maybe direct them to this article. The jury is out. Teacher stress is way worse than just about any other job out there.

Join in the conversation by commenting below finishing this statement: Teacher stress is worse than…