You’ve likely heard all about this “new” and “shocking” teacher shortage happening around the country. But this shortage is nothing new. In fact, the seeds for this current teacher shortage were planted years ago.

“Suddenly” the U.S. has a serious shortage of teachers. Somewhere around 300,000 staff vacancies (over 50K of them full-time teaching positions) remain as the 2022-2023 school year begins.

News headlines call the situation dire, critical, really bad, and “worse than we thought.” A lot of the reports imply that the issue is something that is sudden and couldn’t have been anticipated. Many cite the pandemic as a major factor, pushing teachers into early retirement. But the truth is that this is an issue that has been glaringly obvious for at least 15 years, and it is finally coming to a head, forcing the entire country to pay attention.

Why is There a Teacher Shortage?

There are many reasons teachers are leaving the profession in droves. Additionally, the word is getting out about the horrible conditions and pay in teaching, and fewer students are going into teaching in college. Both are contributing to the current teaching shortage. The main reasons for the shortage include the following:

One of the main reasons for teachers fleeing the profession is an unreasonable amount of stress, and this stress is greatly impacted by the pressure to get student test scores up. Since 2002, teachers have been “teaching to the test,” as a result of the No Child Left Behind Act which increased student testing to twice a month on average. NCLB was designed to standardize testing and track student progress. (Read more about this issue in my post Standardized Testing Exists Only to Make Money).

If the students are making adequate progress in the eyes of the testing company, the school risks losing funding and the teacher risks losing their job. That puts a ridiculous amount of stress on both the teacher and the student. Many of these tests are not developmentally appropriate, and hundreds of millions of dollars of tax dollars are given to major corporations such as Pearson to write them, only to have the test abandoned for a new one soon after.

Another factor that increases stress is class sizes, which have been steadily increasing for years.

As fewer teachers are available, class sizes increase even more, making it more difficult to control behavior and the workload much more unreasonable. Teachers are also now expected to pick up extra classes on a regular basis, for no extra pay, because of the complete lack of substitute teachers.

Meanwhile, to solve the lack of competent teachers, many states seek to hire underqualified or unqualified teachers. All of the research is clear: among school-related factors, teachers matter most. When it comes to student performance on reading and math tests, teachers are estimated to have two to three times the effect of any other school factor, including services, facilities, and even leadership. But instead of looking into the reason that very few students are entering teaching programs, and so many teachers are fleeing, states like Florida are just looking for warm bodies. 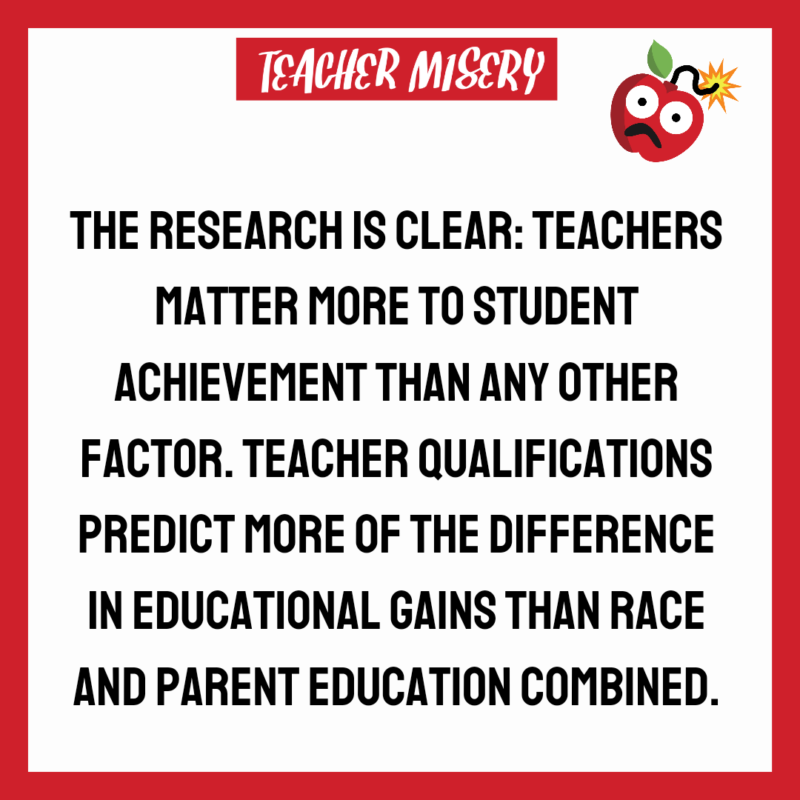 Confusion and micromanagement are other reasons that teachers are fed up. While we are told to tailor our teaching to each specific child, we must also stick to a scripted curriculum, which is often developmentally inappropriate.

And now, parents are getting overly involved, picking and choosing which lessons and materials they do not want their child to be a part of. This only makes the job more complicated, for what do we do with the children who on any given day cannot participate in a lesson?

Of all the interactions I have had with teachers, and my own experiences, the biggest reason that teachers have been fleeing the profession for years is a complete and total lack of respect from students, parents, and administration. In fact, I wrote a whole piece about how Violent and Destructive Student Behavior is Gettis Worse here on Teacher Misery.

Teachers are often blamed for students’ inappropriate behavior and/or failing test scores. Parents are always given what they want, which is often completely unreasonable, and students rarely have any consequences for even the most abusive language and behavior.

It is fairly common for a teacher to be physically attacked by a student, with the student receiving no consequence for the attack, and the teacher often being blamed for it.

In mid-August, National Education Association president Becky Pringle told ABC News that teachers’ unions have been warning for years that untenable pressure has been placed on educators as they face low pay and overcrowded classrooms. A survey taken by the NEA earlier this year showed that 91% of educators said stress and burnout are “serious problems.”

Just how bad is the shortage and what are states doing about it?

12 states have changed or eliminated their licensing requirements for educators in the last year, according to the National Council on Teacher Quality, indicating there is a drastic teacher shortage in these areas. Let’s look at a few of these states specifically:

Florida has about 8,000 teaching vacancies. Gov. Ron DeSantis recently introduced the state’s official website which recruits veterans to help fill in the gaps in schools. Former armed service members do not need a bachelor’s degree to teach the state’s children.

Requirements for a five-year temporary teaching certificate for veterans include at least 48 months of military service with an honorable or medical discharge, at least 60 college credits with a 2.5-grade point average, and passage of a Florida subject area exam. Military spouses are eligible to apply for certification fee waivers and military extensions to certificates.

An Arizona law signed by Gov. Doug Ducey also removed a bachelor’s degree requirement to teach full-time. Arizona is in need of about 2200 teachers.

Texas is a hot mess with nearly 1000 teaching vacancies in Houston alone. It has some of the worst retirement benefits and they haven’t received a cost of living increase since 2004. And teacher pay actually decreased between 2010 and 2019!

In March, Gov. Greg Abbott announced the formation of the Teacher Vacancy Task Force, to make recommendations on how to make the profession better. They’ve met twice in 6 months and have done nothing. Some districts have moved to four-day weeks to try to retain teachers.

In Maryland, more than 5,500 teachers reportedly left the profession in 2022, with Baltimore needing 700 more teachers.

“I’ve been in this business for over 30 years, and I’ve never seen such shortages across the state. There might be doubling up of classes which doesn’t help our students with their learning,” said Cheryl Bost, president of the Maryland State Education Association. (And I can tell you from personal experience that this will only push more teachers to quit.)

To help the situation, Maryland has loosened requirements for certification, and some districts have increased base pay.

Pennsylvania officials have called their teacher shortage a “crisis,” with a need for thousands of teachers.

In Kansas, they are having the “worst teacher shortage on record.” Teachers in Kansas say that micromanagement and stress are the main reasons they are fleeing the classroom.

In Nevada, they need 3000 more teachers and aren’t doing anything about it other than drastically increasing class sizes.

Illinois has around 5,000 teacher vacancies. To address this, Governor JB Pritzker signed a series of bills addressing teacher shortages to lure in applicants. Teacher License Renewal fees dropped from $500 to $50. Subs can now teach 15 days in a row when it used to be five. A Bachelor’s degree is no longer required to teach, you only need 90 hours of college education. Soon the minimum age for paraprofessionals will drop from 19 to 18 as well, which will be pretty awkward in high school senior classes.

In Missouri, roughly 25% of the state’s 550 school districts are implementing a four-day week due to a shortage of teachers. That does nothing to fix a major issue they have, which is one of the lowest teacher salaries in the U.S. Missouri’s average starting teacher salary is one of the lowest in the nation. The minimum teacher’s salary is $25,000, and for those with a master’s degree and at least ten years of experience it’s $33,000. They are trying to increase the minimum pay to $38,000. 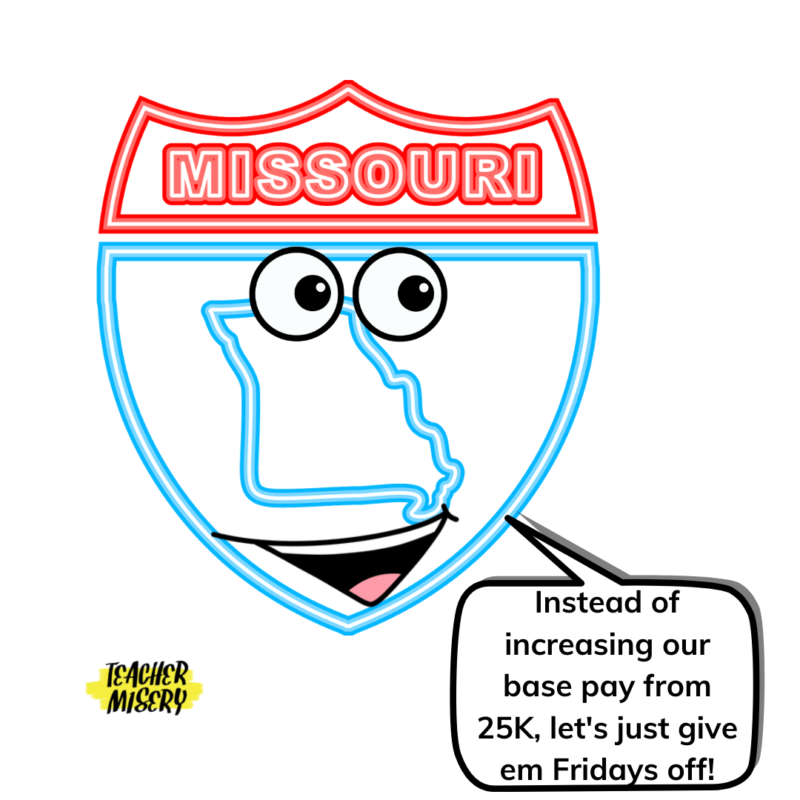 How to Fix the Teacher Shortage

None of these short-term solutions presented by various states will help in any way. It is only a matter of weeks until these underqualified new teachers exit the school for good as well, crying on their way to the parking lot.

Because let’s face it: who in their right minds would show up to be abused and ignored by unreasonably large classes, berated and belittled by administrators who haven’t been in a classroom in years, screamed at and blamed by parents who refuse to hold their kids accountable, and then tackle an ever-increasing workload for embarrassingly low pay? Perhaps when the underqualified teachers quit too, the country will see things more clearly.

Teachers need significantly better pay, better support from administration and the community, more manageable class sizes, and a reasonable expectation of workload (cough, cough not working past contract hours and on weekends).

What is the teacher shortage looking like in your state? Feel free to leave a comment below.